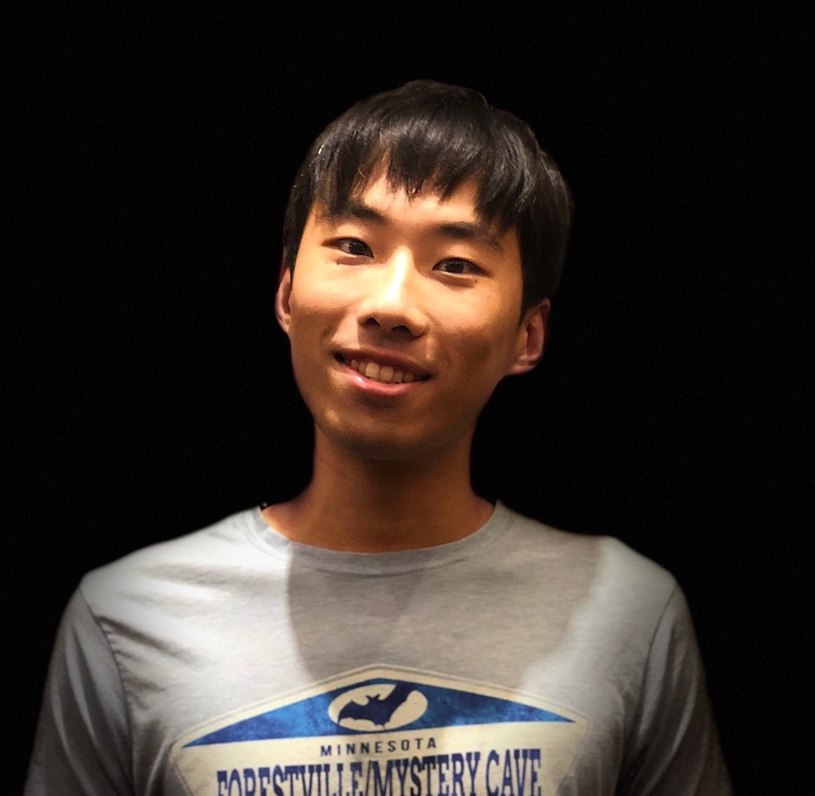 Hi everyone, this is the final (summarizing) blog post for my Google Summer of Code project.

DNA testing is cheap, effective, and abundant. Anyone can just do it at specialized centers with a modest cost of $\sim 200$ USD. Sometimes this may reveal the genetic basis for ongoing illnesses. Other times testing discover diseases that have a late-onset age, contributing to personalized medicine. How do scientists know what region of the genome contribute to a disease? We obtain this knowledge from Genome Wide Association Studies (GWAS). Analysis of GWAS datasets is what this project is about. 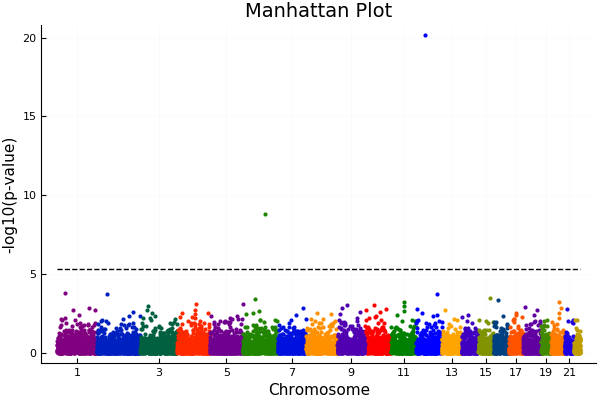 A traditional GWAS analysis would result in a graph looking like the above (generated by MendelGWAS.jl package).

Each colored dot represents a p-value for a single nucleotide polymorphism (SNP), and the dotted black lines represents the threshold for statistical significance. The p-value must pass this threshold for scientists to conclude a SNP is affecting the trait under consideration. Due to the problem of multiple testing, the more SNPs tested in a given experiment, the higher this threshold, and hence, this method admits a lot of false negatives. Those that don’t breach the threshold are effectively deemed not significant unless followed up by further studies. Enforcing such a threshold is not good science, because in the real world there is no such “cutoff”.

Therefore, we want a more effective way to interpret GWAS results. Since GWAS datasets can be huge (> 500,000 people and >8 million SNPs resulting in >100 GB datasets), this new method must also be extremely scalable. As one may guess, there is a trade-off between speed and quality of analysis, and balancing this is quite a challenge algorithmically.

We think the relatively novel algorithm iterative hard-thresholding (IHT) is the most suited for this job. It is one of the most scalable algorithms for subset selection, has great convergence guarantees, is better than LASSO \& MCP for model selection (i.e. producing good quality models), simple to implement, and has low memory-footprint as desired in modern big-data analysis. We pushed through with this idea and implemented IHT in Julia. This post summarizes a few extra features that we added over this summer.

Note: The mathematics of IHT and how it is applied in genetics is explained in this paper

To run the new functions in IHT.jl, execute the following in the Julia REPL:

In Open Mendel, all analysis parameters are specified via the Control.txt file. An example of a control file looks like the following:

Note the genotype file must be stored in the PLINK binary format.

Example files of each can be found here.

Superimposing these predictors onto the previous Manhattan plot, we would get: 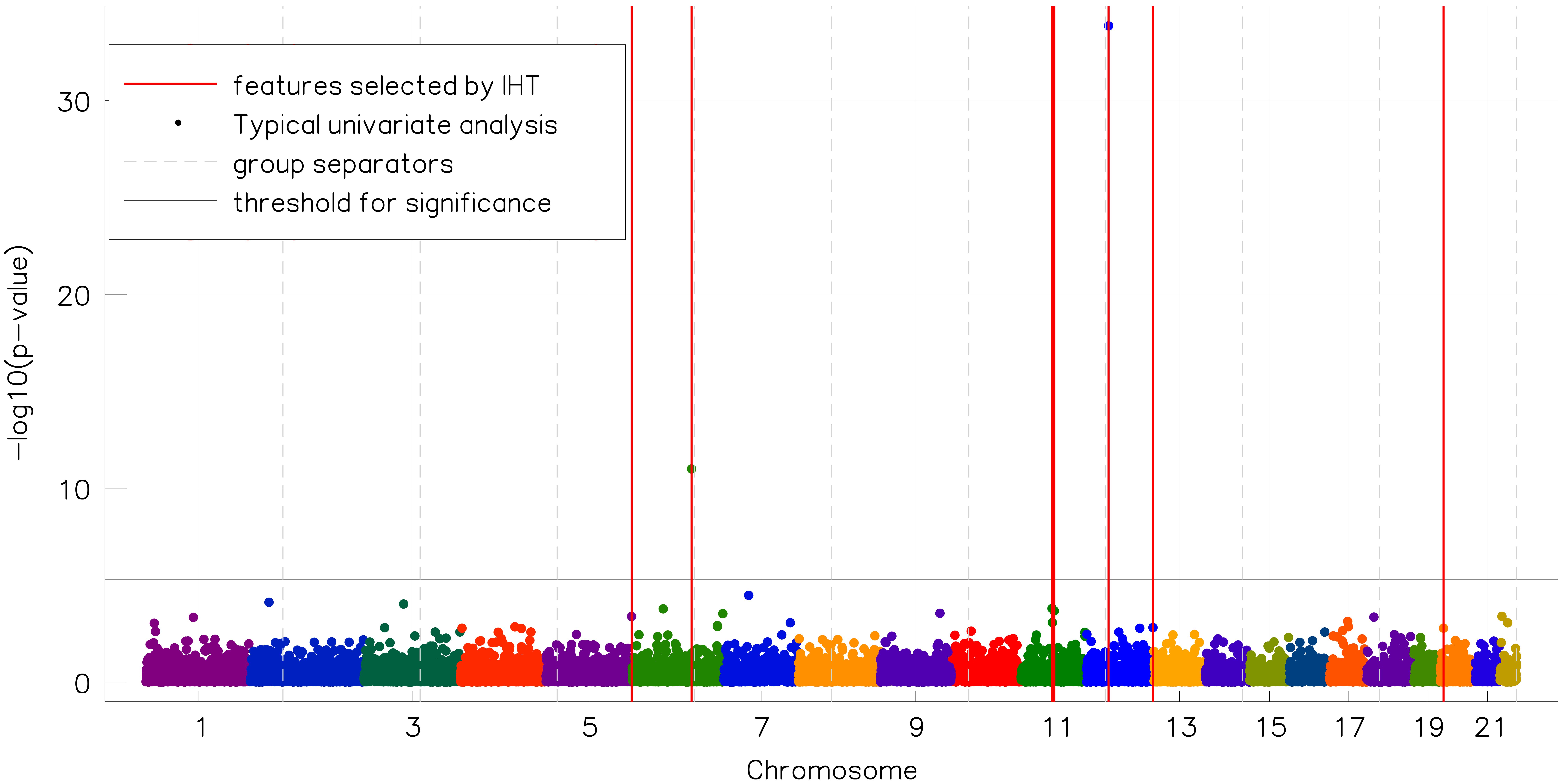 In the previous example, we told IHT that a maximum of 4 groups can be selected, and each group can have at most 2 predictors. The groups were (naively) organized into ten consecutive SNP blocks of size 1000. Here’s a run-down of what each field means:

Note interestingly, predictors are not selected based on their p-value, although a higher p-value is correlated with being selected. This effect is observed in block 4 (between chromosome 5 and 7) where a purple SNP was selected even though a green SNP had a higher p-value. I find many people asking why is this, so I should clarify: IHT is an algorithm for multi-variate analysis, where many SNPs come into the model and affect each other. It is completely different from the traditional single-variate p-value analysis where we consider one SNP at a time. Thus, having a slightly higher p-value does not imply the predictor is a better candidate when other predictors have their effects come into play.

What does grouping mean? why did we do that?

A genetic phenomenon called linkage disequilibrium occurs as a result of the inheritance mechanisms for chromosomes. It ensures that SNPs (predictors) are inherited in large correlated blocks. In the presence of such collinearity, 2 highly correlated SNPs might amplify each other’s effect, and both enter the model as a consequence. This is not desired, because:

Below I humbly summarize my main contributions this summer by organizing them into 3 milestones.

Previously IHT.jl required PLINK.jl and RegressionTools.jl to run. These 2 other packages provided routines to read/write genetic data and functions for doing statistical analysis. While PLINK.jl and RegressionTools.jl have their pros and cons, they have not been widely adopted by the Julia genetics community. Therefore, I built a new backend routine for IHT.jl that is based on the Open Mendel ecosystem - a statistical genetics software in Julia that provides a uniform platform for 11 other genetic analysis options. By integrating with Open Mendel, we unify data handling with other genetic packages, streamlining data processing and compatibility. Obviously this comes with a list of pros and cons, listed below:

Grouping is a fairly intuitive cencept that is rather straightforward to implement, and many mathematicians have discussed and/or implemented it in various forms. Our main novel contribution comes from enforcing 2 levels of sparsity in iterative hard-thresholding, on the group level and within group level. Details for why we did so was explained in a separate section above.

Note that grouping is not a novel idea. It have been done in other subset regression methods such as LASSO, as well as in IHT. However, to our knowledge, no existing variants of the IHT algorithm implement a doubly sparse projection as we have, and nobody applied IHT in genetics or more broadly in the field of bioinformatics.

This summer my research group admitted 2 undergraduates as part of the B.I.G Summer program. I collaborated with them to design a pipeline for weighting each individual SNPs.

The motivation behind weighting stems from biology. In the real world, deleterious SNPs are often quite rare because bad mutations should theoretically be eliminated by natural selection. As a consequence, these rare “signals” could be lost as noise. In order to better detect these signals, we can up-weight these SNPs using some information known beforehand, such as their frequency. If a rarer SNP is assigned a higher weight, then it is less likely that we treat it as noise, because we explicitly tell IHT to give more consideration to these SNPs.

Currently, we successfully incorporated the frequency-based method of weighting predictors by turning the least squares criterion in IHT into a weighted least squares criteria. Now we are investigating less naive methods for weighting predictors, such as a gene candidate approach or pathway-based approach. These 2 methods take real biological insights into account when assigning weights, and thus, our model should more accurately reflect reality. However, designing a pipeline to query an (online) database for millions of SNPs is quite a software engineering challenge.

Once again, I thank Julia computing for sponsoring my trip to JuliaCon 2018.

I talked to many people, and brought home many ideas for improvements. Other than updating all code to Julia v1.0 (cheers!), there are a few potential paths:

$\textbf{Less important things on the side:}$:

You May Also Enjoy